Ford collection Topics: Calhoun, John C. Vol 1: Men of mark in Georgia : a complete and elaborate history of the state from its settlement to the present time, chiefly told in biographies and autobiographies of the most eminent men of each period of Georgia's progress and development. Nov 8, by Northen, William J. Topics: Georgia -- Biography, Georgia -- History.

What happened to the signers of the Declaration of Independence?

He is remembered not just for his signature, but also his vote for independence and the mad dash he made to Philadelphia in time to cast it. His story has been recounted time and again in popular media for the benefit of generations of Americans who look to the Revolution as the seminal American event. A tie between them would preclude a unanimous vote from the colonies. This was no small feat as Rodney was in terrible health.

Yet many newspaper and magazine articles recalled that he strode into the hall still wearing spurs, and cast his vote in his riding boots. Early published accounts of his revolutionary contributions did not mention his hectic ride and vote at all. New books sometimes inspired press stories and commentary. A smattering of newspapers in repeated a humorous anecdote about Rodney that had been included in the multi-volume Biography of the Signers of the Declaration of Independence published by R.

Americans in took pride in the fact that they had thrown off European aristocracy. Over the centuries, Rodney was often mentioned in newspaper and magazine articles that recalled all fifty-six signers of the Declaration of Independence. When stands it? During the Revolutionary War the Declaration was moved numerous times, along with other records of the young government.

As the British threatened at various times, the Declaration was moved, first to Baltimore at the end of , then a county courthouse in , and back to Philadelphia in the summer of Even after the war, the Declaration did not find a permanent home.

As the fiftieth anniversary of the Declaration approached, President John Quincy Adams had it printed using a "wet-pressing" to produce a facsimile, hastening the original's own deterioration. Adams' act marked a turning point. By the mid-nineteenth century, the Declaration's fate seemed to be improving. At this building, the Declaration remained for thirty-five years, hanging on a wall opposite a tall window where it faded and was subject to temperature fluctuations.

With the Centennial, a new phase of the Declaration's history commenced. When it was put on display in in Philadelphia, the Declaration's physical appearance raised concern and Congress established a committee to consider its preservation. This Congressional committee asked the National Academy of Sciences to study the Declaration's condition, concluding that the document could not be restored and that it should be kept out of the light. 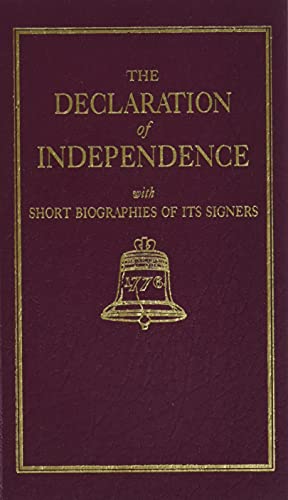 Despite the recommendations of the committee, the Declaration remained on display for eighteen years in the new State, War, and Navy Building, when, in it was finally taken off of display because of its faded condition and stored in a steel case. From this point on the story of the Declaration is that of careful physical monitoring and the move to its permanent exhibition shrine at the National Archives building. Another examination by the National Academy of Sciences in produced the recommendation that the Declaration be kept out of the light.

But by this time there continued to be such a demand to see the document that the State Department began to make plans for having it placed somewhere else on display. Preservation expert Clapp relates that "by , the State Department began to feel that possession of this document was a nuisance. People insisted on seeing it, and if they couldn't see it informally, they would get letters from important people addressed to the Secretary of State to assure a private exhibition. The Secretary of State therefore decided to entrust it to somebody whose business it was to handle documents - the Librarian of Congress" [ 10 ].

The Declaration was put on display at the Library of Congress in , where it remained for the next thirty years except for a few years storage at Fort Knox during the Second World War. By the time of the Second World War the Declaration had become enshrined as an object of study as much as a sacred American text. In one of the guards noted a crack in the upper right-hand corner of the document, leading to yet another long report on the document's condition as well as a new position, Keeper of the Collections. Alvin W. Kremer, filling that position, began a series of regular photographic records, adding to the growing archives about the Declaration.

Armed with all these studies, the Declaration was moved in to the new exhibit space at the National Archives, its permanent home, and sealed in a Thermopane glass case with inert helium gas and measured amount of water vapor.

Surrounded by archivists and preservation specialists at the National Archives, the Declaration was sure to become an object of regular and even more detailed analysis. There was a major physical examination in Preservation pioneer Verner Clapp started off a essay on the Declaration with this sentence: "The Declaration of Independence is one of the most abused documents in the history of preservation of documents" [ 11 ].

Yet, something seems to be wrong with such an assessment. Rather, it seems that the Declaration, during the past hundred years, has been the most fawned over document in American history.

What Did the Founding Fathers Eat and Drink as They Started a Revolution?

This is certainly the case in the past decade. Four years ago the Declaration was subjected to an examination by a fiber-optic device.

As one of the conservators involved in this process noted, "We are really the first to definitively document all of the features of the Charter documents It's painstaking work but this information will be invaluable" [ 12 ]. The use of the fiber optic analysis was only a warm-up. In the documents will be taken off display for eighteen months for the re-encasing. A long article in the New York Times revealed that the funds were being partly used to re-install all of the documents including the Constitution and the Bill of Rights in a more modern exhibition [ 14 ].

During much of the time that the National Archives has been monitoring the deterioration in the physical condition of the Declaration, it has also been contending with the growing use of ever more sophisticated electronic information technology to create and maintain records. In an article meant to raise concerns about the durability of new electronic media being used by the government for recordkeeping, the journalist started this way: "The parchment has yellowed and the ink is badly faded, but with a bit of effort one can still make out the words of the Declaration of Independence and the Constitution, penned more than two centuries ago.

Both are painstakingly preserved by the National Archives in Washington, D. The comparisons were obvious, even a bit over-used in the rapidly increasing writing about the concerns with the durability of electronic media. The intent was to state that the older recordkeeping systems, despite whatever other challenges they provided, were at least more likely to be around for the next century or so.

There is no reason, of course, to castigate archivists for clinging to older forms of records because of symbolic and other values. The multiplication of the Declaration's text does not mean the original should be left to rot. After all, we know that for many records the text is intimately tied to its form.

A French book historian, Roger Chartier, wrote that "any comprehension of a text is necessarily dependent on a knowledge of the material forms it has taken" [ 16 ]. The same is true for records. Yet, there are complications for revisiting the Declaration in the Information Age. Chartier's statement equally well applies to those records created in electronic form, and it is not hard to imagine that the next writers of a new Declaration something of equal importance in the twenty-first century as the Declaration was to the eighteenth would be drafting in HTML for placing the document on the World Wide Web.

Given the mixed results by archivists managing electronic records, could we be as successful in preserving for two centuries such a document? There are more questions beyond the effectiveness of managing electronic records. Do we realize whether the symbolism of the Founding documents like the Declaration and their display in the Rotunda of the National Archives is a symbolism for all Americans?

The concern about the display of a symbolic Declaration is complex and compelling. Pauline Maier, in the most important recent study of the Declaration, argues that the monument at the National Archives is completely wrong, because it suggests a "glorious but dead past. Others have had similar thoughts about this. Others have expressed similar sentiments. Some see such focus on these older documents as problematic, as a form of civic religion gone astray in which we have lost sight of the historic context and circumstances of the creation of the documents and simply paralyzed our ability to govern ourselves [ 18 ].

Even these criticisms capture the abiding interest in these fundamental records and the manner in which the information and evidence from these records are used and viewed. For some commentators, such symbolism is tied up with more intricate historical events. James Atlas, in his contribution to the literature on the culture wars, wonders if "one of the main weaknesses of the American federation of states is that it's such an amalgam of diverse interests and identities.